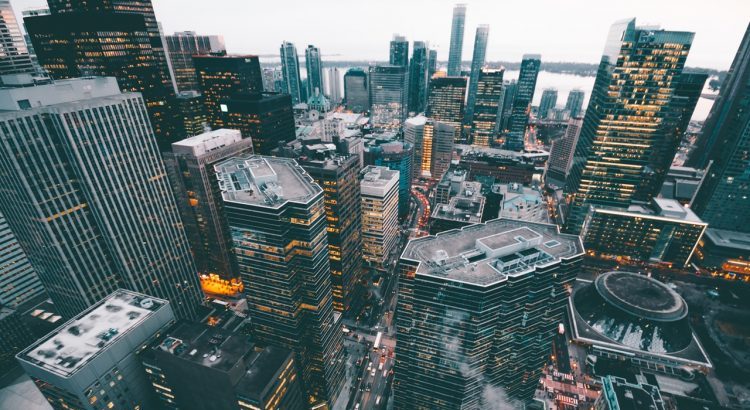 Ever wonder how cities, towns, and villages are created in the first place? Do towns spawn companies or do companies spawn towns? Which comes first, the chicken or the egg? Obviously, a company requires employees, so having a town with potential workers in it is beneficial. On the other hand, people will only live where they can find work, so businesses must be operational in order to provide employment and attract inhabitants in the first place. Is it then necessary to have a company in order to create a community? Or, does the community create the company?

You’ll recall from your history classes in school that people settle where resources are plentiful because without water, food, and shelter they cannot survive. Once the necessities of life are provided, trade develops as people seek to exchange things they have for things they do not have and can not get in their area. If a region has an abundance of a particularly popular item, such as bronze, gold, spice, or silk, industry develops to meet the demand.

It all comes down to two things: import replacement and export development.

All cities must engage in their own economic development. It’s fundamental to survival. Without jobs, people cannot work and earn wages, and without wages they cannot buy the food, clothing, and shelter they need to survive. Economic development comes down to replacing imports with local goods and services and creating exports to be sent to other cities.

The import side of the equation is easy enough to understand since no city can produce everything it needs – oranges don’t grow in Chicago for example. But exports are equally important. A robust economy requires the active flow of the import replacement and export development cycle. For example, say Chicago is importing widgets from San Francisco for twenty dollars. That’s great for San Francisco, because they ultimately receive that twenty dollars, but Chicago loses it. That’s twenty bucks that’s leaving Chicago’s local economy and going elsewhere. What can Chicago do about it? They can develop their own widget locally, thereby replacing the San Francisco import with their own. Since it’s made locally, it will usually cost less – say fifteen dollars for the sake of argument. Now you’ve stopped sending twenty dollars to San Francisco, have kept fifteen dollars in the Chicago economy, and freed up five dollars. Those five dollars can now be spent elsewhere in the local economy or may be applied to product innovations, enhancing the widgets to make them superior to the ones in San Francisco.

Thus, within a healthy local economy, imports are replaced with locally made goods, which are then improved upon from the savings. That’s the first step. The second step is to develop exports. Using our example, if five dollars is freed to be used on product development, it is possible to create a product superior to the ones previously imported. If that’s the case, those products become exports. Chicago can add bells and whistles to their widgets and begin exporting them to San Francisco. Now money is flowing into Chicago’s economy as people in San Francisco begin buying the improved Chicago widgets instead of the inferior local widgets. It’s a constant cycle of replacing imports while creating exports in order to keep as much money in the local community as possible.

When money is plentiful, innovation and employment are much easier to be had. Communities flourish because they are able to offer jobs and provide opportunities to residents. When money is tight, opportunities are harder to come by. So, the key is to have as much money circulating within the local community as possible. Import replacement and export development accomplish exactly that. It keeps local money local while pulling money out of other communities, which makes even more money available locally.

Money has to remain local in order for a community to grow. Sadly, nothing of the sort is happening in many communities. Most major businesses are from elsewhere and sell products made all over the world. This is especially true of third world nations, who export a single primary commodity and import everything else.

Note that exports do not have to be manufacturing based. I use that as an example only because it’s easier to grasp. Certainly service industries will work as well. It doesn’t really matter. Any time an imported item or service can be replaced with a locally generated product or service the community gains. Keeping the money local allows it to be recycled.

By recycling money, I’m referring to its ability to be used again and again for something else. When you recycle plastic bottles, they can be turned into other things. When you recycle a dollar, it can be used for other purposes. For example, you pay a company in New York $100 for a table. You get the table, they get the money, and your hometown is out a hundred dollars. However, if you pay the same $100 to a local company, you still get a table, but the money stays in your hometown. The table maker may spend that hundred dollars at the local grocery store that in turn might pay a local farmer for produce who will then use it to buy tools from the local hardware store. The hardware store owner may do all manner of things with it, including buying a table, starting the cycle all over again. Any one of those people could put the money in a local bank that could then loan it out to others. Either way, that’s a hundred dollars that gets used several times within the community. From you, to table maker, to grocery store, to farmer, to hardware store, to table maker is five hundred dollars in economic activity. That’s $500 of local economic development that would never happen if you bought the table outside your community.

Not only that, but as local goods are manufactured, more businesses are started up and the number of skilled laborers increases as well as the number of diversified trades and industries. The more diversified a community becomes, the more able it is to imitate, replace, and innovate a variety of products. This is exactly what happened to New York City and every great city past and present in every country. They prosper rapidly and efficiently when the cycle operates and only go down hill when the cycle stops.

“Import-replacing is now and always has been a city process. … Economic life develops by grace of innovating; it expands by grace of import-replacing. These two master economic processes are closely related, both being functions of city economies. Furthermore, successful import-replacing often entails adaptations in design, materials, or methods of production, and these require innovating and improvising, especially of producer’s goods and services. … Any settlement that becomes good at import-replacing becomes a city. And any city that repeatedly experiences, from time to time, explosive episodes of import-replacing keeps its economy up-to-date and helps keep itself capable of casting forth streams of innovative export work.”
– Jane Jacobs, Cities and the Wealth of Nations

Side Note: Cities and the Wealth of Nations – Principles of Economic Life by Jane Jacobs

Yes, these are extremely simplistic examples, yet they still make the point. The more money a community can control, the better. It isn’t control of the economic rudder in the true sense, since the banks can always choose to loan the money to outside interests, but it does create more opportunity than the alternative. This is why Mondragon has been so successful. They keep a good majority of their money within their system. Through having control over their own credit union, they have control of the economic rudder. Recycling money within the system provides economic development that spawns new companies offering services to both the cooperative and outside customers. Those outside customers import Mondragon services and products and send their local money to Mondragon. Money from Mondragon exports adds to the amount that can be recycled thus further sustaining the process. It seems to be a self-regulating, self-generating system.

Most municipalities don’t recycle their money. Most have no control over the economic rudder and there is often no concerted effort at import replacement or export development. There is no system or structure of any kind. It’s a haphazard, every-man-for-himself, survival-of-the-fittest anarchy called free enterprise.

The system, as it now exists in most cities and suburbs, is completely unsustainable. If history has taught us anything it’s that cities, nations, and cultures flourish when there is great economic activity and die when there is not. Think about it, every great culture of the past was based on a major trading center, a center of diverse, innovative economic activity. Athens, Rome, and Constantinople were all hubs of commerce and thrived in their time. It’s just as true today. New York, Hong Kong, and Singapore are all vibrant and thriving financially. Now, think about any town you’ve ever known that was dependent on a single industry. What happens when that industry dies or experiences a prolonged downturn? Lack of economic activity is death for a community.

While communities may form for any number of reasons, availability of resources for example, they are only sustained through companies engaged in import replacement and export development. The economy is paramount. Without it, all the resources in the world are of little use. Obviously, companies in such areas have to protect the natural resources because without them it becomes very difficult to do business. There is a definite relationship between the economy and the ecology, between business and the environment. That relationship needs to be more thoroughly thought out and considered. I’ll have more to say about it in an upcoming blog.

We’ve discussed how average citizens can gain control of the economic rudder without creating our own bank. And we’ve explored how the Mondragon cooperatives finance their expansion through having their own credit union. But how can we finance the import replacement and export development cycle, or create a local cooperative of employee-owned businesses representing a diversity of goods and services within our communities? If it takes local business to sustain a community, investment capital to start business, and control of the economic rudder to guide both toward ends that best serve the people and their environment, what is it that allows the process to begin? To answer this, we need to examine how money works.

Tim Wardell is a deep thinker, gardener, husband, father, would-be science fiction sex comedy novelist, and margarita aficionado. When not doing any of those things, he reads, studies, practices, and blogs about sustainability.

“You never change things by fighting the existing reality. To change something, build a new model that makes the existing model obsolete.”
~ Buckminster Fuller